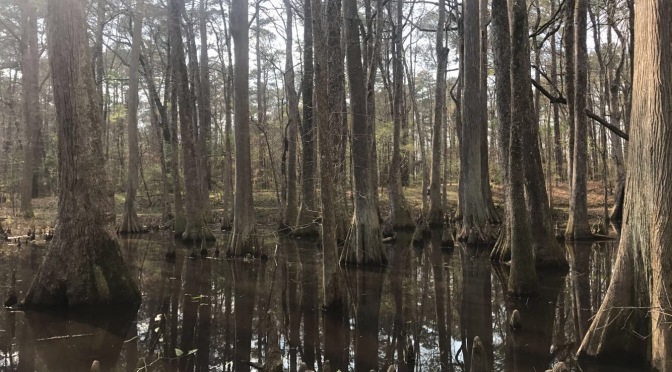 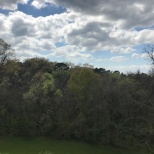 The Natchez Trace Parkway begins in Natchez, Mississippi and ends in Nashville, Tennessee. It is 444 miles long and stretches from the border of Louisiana through Mississippi, Alabama, and Tennessee. It was originally traveled on foot by Natives Americans, Kaintucks, and traders. And I traveled the entire parkway in their footsteps, stopping off for varied adventures along the way.

My first stop on the trace was but minutes into my journey- Emerald Mound. This is the second largest mound in America. The first I learned, happens to be in my home state. I would later pass a sign for it in Northern Illinois and think nothing of it until later.. a missed opportunity for sure.

Unlike most mounds which were just used for burial purposes, this mound had seen its fair share of life. Temples and ceremonial structures were built on top of it ,and I swear you can’t  help but picture the indigenous people of the time living out their lives here as you climb the steep stairs to the top of the mound. 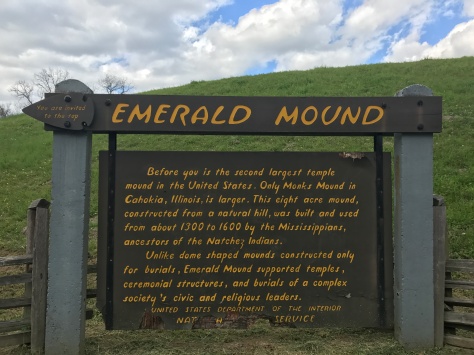 I arrived at my planned campsite for the night leaving plenty of time to set up only to find that both campgrounds on location had been shut down. This pushed me further down the trace where I stumbled upon Mount Locust, the only Inn still standing from the late 1700s along the trace. Behind the inn was a trail that was a part of the original footpath of the many souls who traveled this path before me from those pushing west to travellers, traders, and poachers. The trail enlarged as traffic changed from foot to carriage over time.

I luckily found a free campsite not too far up the road from here at Rocky Springs State Park where I ended my night with yoga under the stars and a few chapters on the history of the band Aerosmith.

In the morning I took a short stroll through Cypress Swamp. This was where I realized I was going to fall in love with Mississippi. It felt as if the quirky signs posted along the trail spoke directly to my soul in my own little language, urging me to carry on slowly and really examine all that I was seeing before me. And if this wasn’t enough, the scenery sure was. Large Tupelo and Bald Cypress trees climbed upward out of the heavy waters, varied green landscapes thrived along the trail. I was pulled in even further by the peculiar looking spikey stumps of bark pertruding from the water, ignoring the fact that they had forgot to grow into a full tree. I learned that hundreds of years from now these trees will all be replaced with different species of trees due to the changing water conditions.

Taking advice from the signs, I stopped to take in a tiny blue lizard playing on the bark of a tree nearby. A father walking past tried to inquire about what it was that had caught my eye and lost his footing and slid right down into the swamp with the trees. My favorite part was when he tried to play it cool and act like he wasn’t just thrashing in the water moments ago while non chalantly continuing his conversation with me. And to top it all off at the end of the trail was a peaceful guy around my age releasing beautiful ohms into the air with a small singing bowl he brought to the swamp with him. 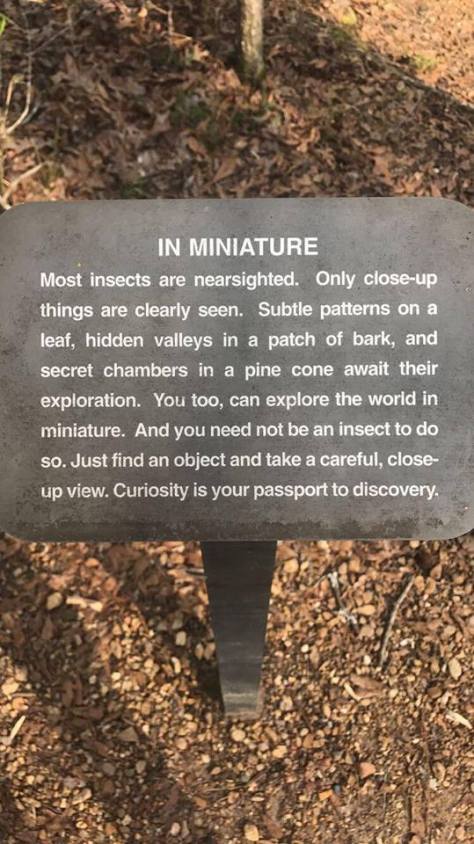 From here I was in pursuit of Jackson, Mississippi to see the St. Patrick’s day parade referred to as green Mardi. Just like Mardi Gras, everyone is dressed up (only in all green this time) and drinking and dancing on the streets. The floats even throw beads. However I believe what I found killing time on the way there was far more interesting. I stopped in at The Museum of Forestry and Agriculture and found a little bit of what I expected.. some information on plant systems and natural Vs GMO based agriculture. I found a lot of what I didn’t expect, a full sized village called Smalltown, Mississippi preserved to its 1700 state complete with a church, school house, barn, blacksmith, herbal practitioner, general Store, and more. I spent hours winding my way through the streets and buildings. Unfortunately technology failed and most of the pictures taken here here were lost. A short clip from a balcony over looking the town is available on my instagram: writeyourownstory2017

A volunteer at the museum told me of an active Indian reservation about an hour or so off the trace. He said there was a good chance of me meeting an active member, a goal of mine for this state. Although it was Saturday and he highly recommended I visit during the week, I headed full speed into the detour.

Off the side of the road I noticed a small sign that read “pow wow” with an arrow pointing to the left. And sure enough, around that corner was a field full of people of all ages setting up for a ceremonial pow wow. Within five minutes of entering the field I had spoken to two active members and met an older couple who make a living traveling the country selling handmade jewelry, art, blankets, and knic-knacks at gatherings such as these. After a bit of prying I learned that besides this couple, I was the only one at the field who was NOT an active tribe member. I sipped on hot coffee while watching members perform a variety of traditional dances and was intrigued by their foot work and stylistic use of dynamics and levels to collaborate with the roar of the drums being played by two small groups of elders. I was even pulled right out in the action and had the honor of participating in a traditional Choctaw social dance.

Exhausted from a long day of adventure, I settled into the local Walmart for the night, eager to see what would await me back along the trace the next day.