Death, Witchcraft, and the equivalent of Disney World on LSD… 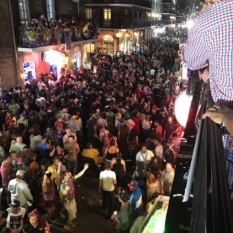 Entering NOLA (New Orleans Louisiana) was like stepping out of a time machine and back into history. The houses were so old that many of them still had fire burning lanterns on the front porches. The buildings were small and colorful and it was clear that they held within their walls a lifetime of history. Walking through the downtown it was immediately evident the amount of culture this city harbored. French, Cajun, Creole, African American, Congo, and Haitian culture and norms have been imprinted all over NOLA over the years.

My favorite part of this rich culture was the voodoo and hoodoo lifestyles that were born out of the blend of descents and beliefs. And this isn’t just NOLA’s history, this is still an active tradition for some locals today. The town is stock full of voodoo, hoodoo, and magick shops filled with supplies and books for practitioners as well as museums to learn the history of these crafts. The city has even branched out to vampire shops and a death museum.

My father flew in to meet me at Mardi Gras, and as he has similar interests to me, we were sure to check out this culture in full . We walked through the death museum where we read hand written letters from a wide variety of serial killers ranging from tribes of aboriginal people and cannibals to John Wayne Gasey and Jeffrey Dahmer. There was even official police reports and crime scene photographs. The museum housed human teeth, shrunken heads, and all sorts of oddities. There was a video playing in the background of how to properly dislodge someone’s spine to top it all off. We walked through voodoo shops selling dolls, spell casting materials such as wolf’s fur, magickal candles and stones, and more.

We then headed to St. Luis Cemetery #1 where Marie Laveau, the queen of voodoo, was buried. We learned from the tour guide that she was also the first activist for women’s equality as well, a well-rounded woman. Fun fact, this cemetery is also where Nicholas Cage has his burial mound built for his future decease.

NOLA also had a rich art and music presence. From blues bands to street performers you could truly see it all here. In the mornings there was a French Market selling handmade crafts, clothes, masks, and tons of food. Cafe du Monde was at the end of the market serving up Cafe au lait and french beignets with an extremely generous amount of powdered sugar. Most mornings the line was out past the cafe and down the street. We lucked out one morning and made it in within ten minutes.

Next door to here was a hot sauce plaza with every type of sweet, tangy, and spicy jam, sauce, marinade, seasoning, and salsa you could imagine. I signed a waiver here to try what is supposedly the world’s second hottest hot sauce. It honestly wasn’t that bad, though I do not recommend eating multiple servings of it in a row as I did. The pain will catch up with you, I promise. 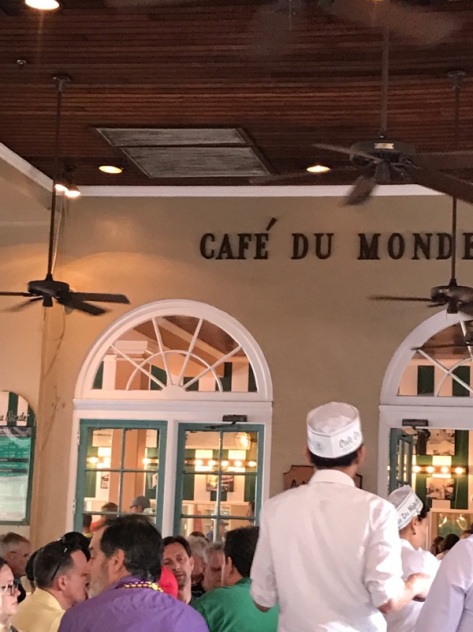 Mardi Gras itself was the equivalent of Disney World on LSD. People on the streets playing music, dancing, and drinking. People dressed up in costumes of all sorts. People on balconies throwing beads to the immense crowd below. Endless parades of flamboyant floats with krewes tossing beads and other goodies out into the crowd. People slipping and falling everywhere as there was no longer a ground to walk on, only beads and crushed beer cans.

We drank the strongest drink known to New Orleans called hand grenades and ended up on a balcony ourselves tossing beads to ecstatically drunk people below. Later in the night, cops rode a seemingly never ending line of horses down Bourbon street declaring the end of Fat Tuesday. The in between remains a mystery.

I said goodbye to friends I made in NOLA, dropped my dad at the airport, and headed to find a dispersed camping location in Atchafalaya National Forest.
P.S. Be sure to check out the videos of us riding a mechanical bull on my instagram! User name: writeyourownstory2017

From 1 day old ducks to full grown turkey vultures, getting my wildlife fill!
The beautiful home I had the privilege of staying in on the Seacoast of New Hampshire, met so many wonderful travelers here as well.
I never expected to find a funky town on the east coast, but we’re getting closer! Hello New Hampshire!
Pillories in the street, the gardens of the Ropes Mansion (aka Alison’s house in Hocus Pocus), to a Massachusetts’s tradition: chop suey sandwiches.
The stones in this graveyard are so old that time has rubbed them all blank. Fun fact, this is where Billy is buried in hocus pocus.
Home of Jonathon Corwin, the judge who sentenced the hangings during the witch trials of Salem in 1692. This is the only standing home with direct ties to the trials left today.
I will swim in all 7 seas before I die 🏝